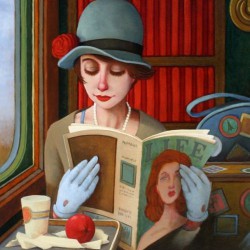 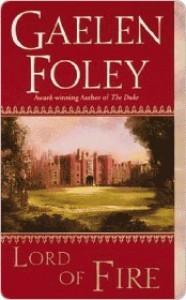 Now, about Lord of Fire.

I love the character of Lucien with a passion. Tough guy that he was but oh so vulnerable in love. I don't know what is about him that I love so dearly. He was an isolated man and very jaded from the war and his profession. I think it is only natural that he would want something "clean and pure" in his life, after having witnessed so much suffering in life. To meet Alice at one of his infamous orgy parties which he hosted to collect information for the Crown is the beauty of the plot: meeting an angel in hell. The first ray of light in darkness. How could he not hold on?

I suppose it is questionable how Lucien blackmailed Alice into staying at his house for a week and how that could seem unappealing to some readers. It did not bother me because his lonliness and desperation for tenderness and love really spoke to me. Maybe I am gullible. But this particular emotion really strikes a note with me.

Alice was all that is beautiful in Lucien's eyes. She was a loving character most of the time but turned rather TSTL later in the book so that we could have a conflict, quite a shame. It all started with her ultimatum when she asked Lucien to choose between revenge and her. I thought oh you poor dear do you not know that Lucien had to kill this guy or this guy would kill him and whoever that mattered to him? She then went on to thinking about how she would explain her lack of virginity to her future husband after falling out with Lucien. I was exasperated. What the hell woman? You have got a guy who loves you hopelessly and desperately and you are holding this revenge thing against him when you should have stayed by his side? Alice is a 3 stars heroine whereas Lucien is all the way 5 shining stars.

Their relationship is heartbreaking. 2 lonely souls, kindred spirits finding solace in each other. It isn't often that you find a hero who has "his soul in his eyes" in Foley's own words. Intense love is most fragile. It has something to do with having too much to lose.

The war and spy elements were ok but at times I just skip those paragraphs. The last 20% was rather untidy. I am not a fan. If I was rating on the relationship between Lucien and Alice alone I would have given 5 stars. But the book has questionable plots in the 2nd half and that resulted in a few TSTL moments for Alice. Gotta take a star away. It was rather messy in the end.

But I am going to dream about Lucien tonight, er, well, this morning.
Tweet